The following photos show how the ‘Wizard of Thieves Hollow’ was created, and the story that goes with him…… 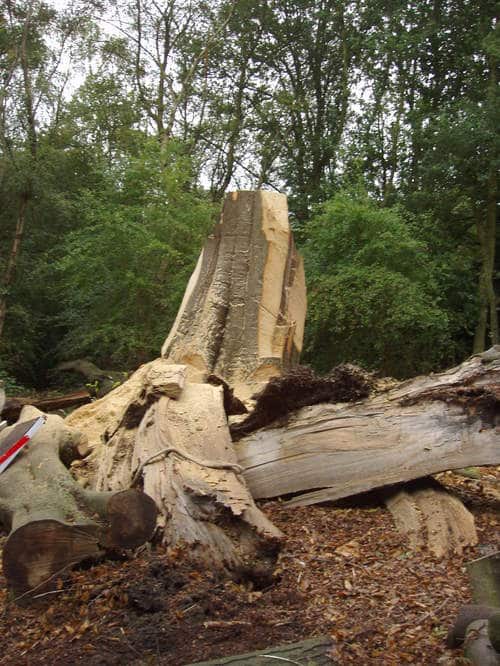 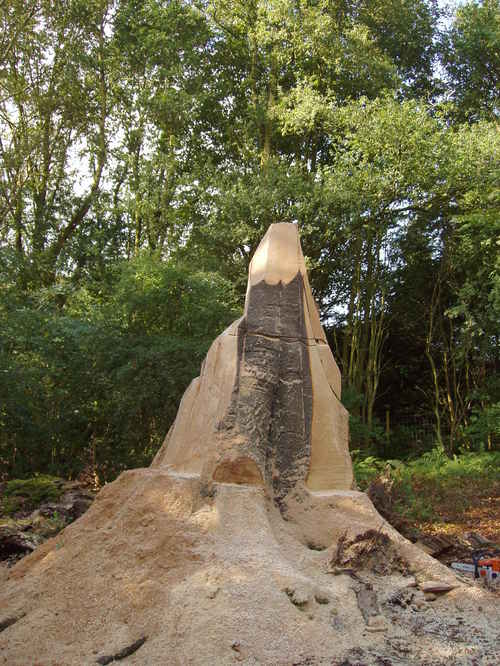 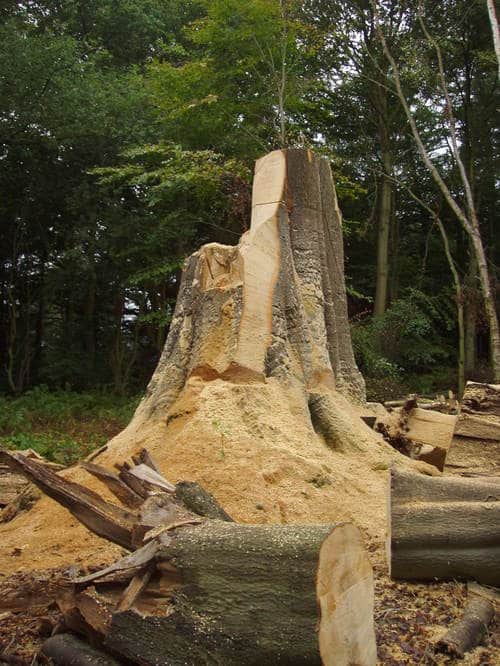 These photos show the stump of a 100+ year old beech tree which was blown down in a strong wind. It is very wide at the base and stands at about 12’+ high. There was a split (caused by rot) which travelled down the tree causing the ledge on the left side.
In the second photo it shows the ‘ledge’ that was made as a result of trying to find where the good wood started.
The third photo is a view from what will be the front of the Wizard. I had to cut some steps into the sides of the base to provide a foothold. I would not really recommend this method if scaffolding is available or can easily be put in place. I don’t recommend using footholds because it is not as safe as having a bigger area to move your feet around.
– click images to enlarge

As there was a large lump of good wood which was higher than the ‘ledge’ I thought this would be suitable to make the Wizard’s hat.
The shape begins to come out of the wood – the Wizard will be sitting with his hands on his knees so a large block of wood has been removed from under his hat.
A friend of mine – Tony Gates, a tree surgeon – had removed large parts of the tree and made some benches out of them. He has a ‘Woodmizer’ which can cut out large planks for garden furniture.
– click images to enlarge 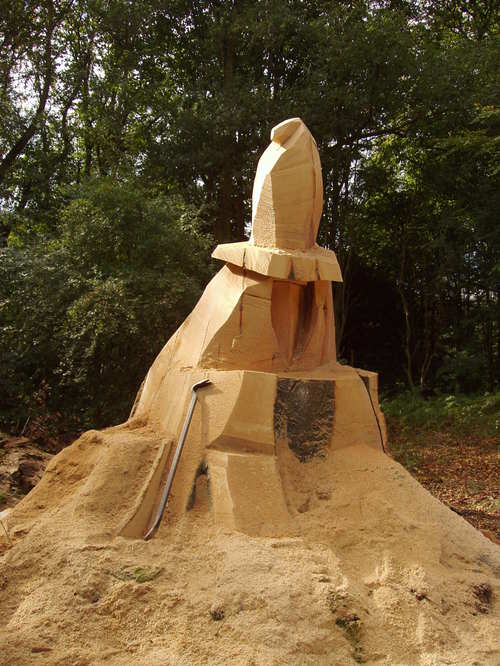 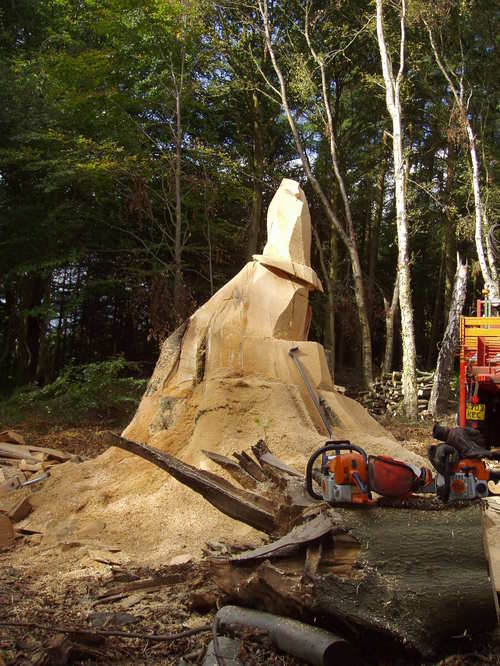 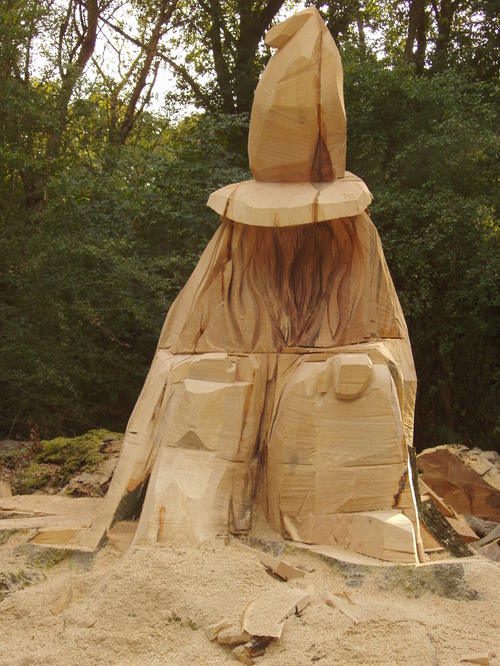 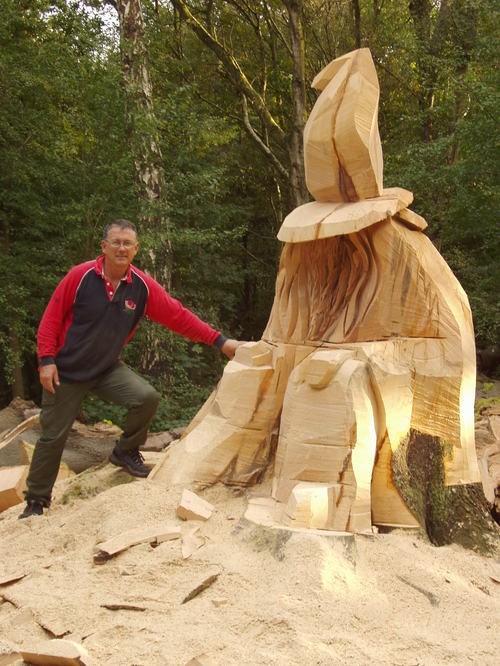 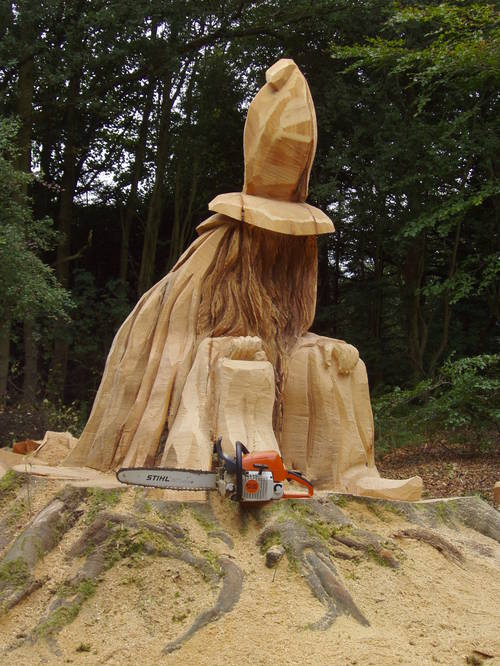 Top right, the hair is shown in this picture and the outline of the hands. Unfortunately it was at this point that I found the wood where the Wizard’s face was going to be was very soft and going rotten – so I was going to leave it as hair with no discernable facial features.
Top left photo shows the ripples in the Wizard’s cloak. It was fairly breezy when the Wizard was carved so the ripples are intended to convey that the cloak is being blown by the wind.
Bottom left photo gives an idea of the overall size of the Wizard. I am standing next to it, a couple of feet off the ground, part way up the base.
Bottom right picture shows that the hands have been carved and some of the ripples in the Wizard’s cloak are starting to take shape.
– click images to enlarge

“Walking down the path from the house, through the woodland, I spotted a glade amongst the trees. There, in the middle of the glade, was a Wizard. He has just sitting there, as if he was waiting for something…….”
– click images to enlarge

“As I got closer I saw that the Wizard was the biggest Wizard I had ever seen! He was not moving. He looked as though he was sitting there, silently, thinking. Or was he asleep?”
– click images to enlarge 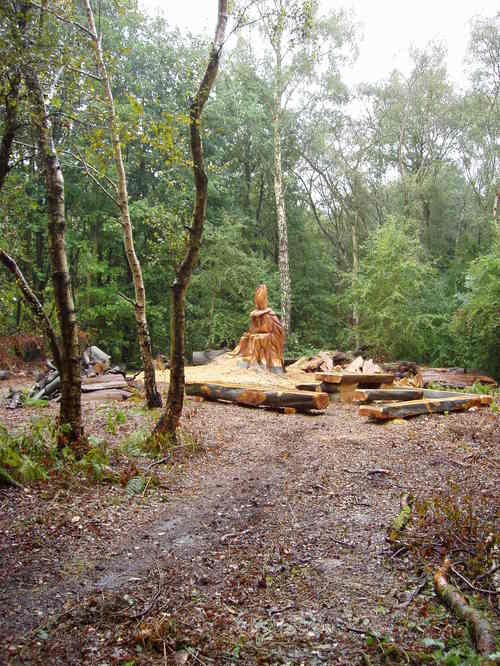 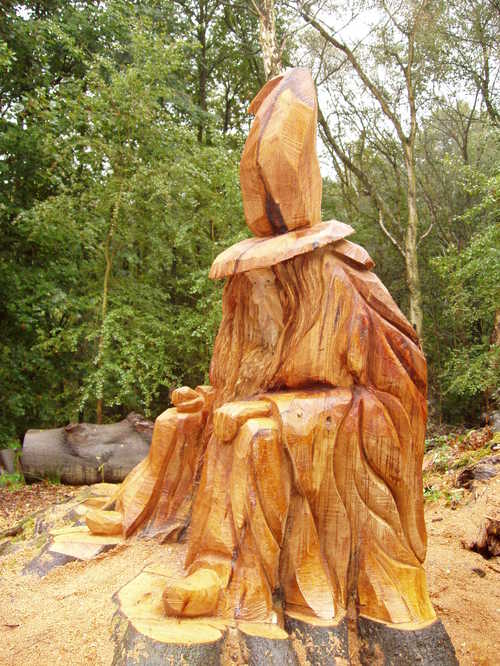 “I noticed his right hand was clenched, and I wondered whether this was a sign that the Wizard was under some tension – as if he was upset about something. I noticed his left hand was laid flat on his knee. I was not sure whether he was calm – or annoyed!
I moved closer….”
– click images to enlarge

“I noticed the Wizard had a kindly face. I was not sure whether he was suprised, or perhaps yawning. He did not move, he just kept looking at the ground. I walked to where he was gazing. He looked at me, directly in the eyes. I could see he was upset. He has been sitting there waiting….. for a very long, long time. And, he seems to know that he is going to be sitting there, in all sorts of weathers for a very long time to come.”
– click images to enlarge 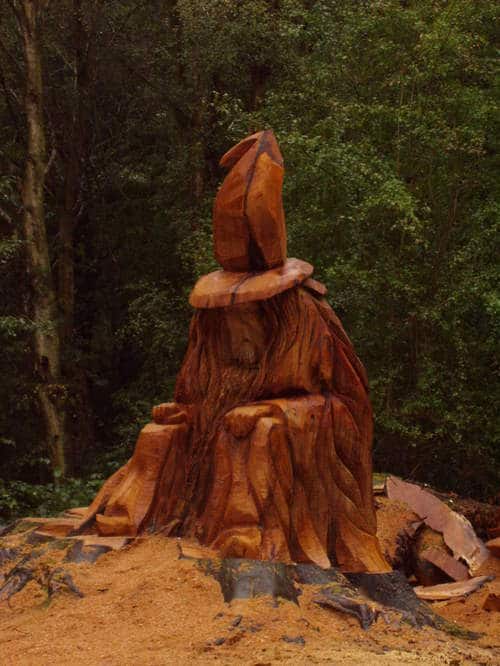 “I walked away as it was going dark…”

“I walked away as it was going dark and remembered that I had heard a story, a legend, about the ‘Wizard of Thieves Hole’. I think this was the Wizard. I could feel that the Wizard wanted to talk to me so I went back – and he told me why he was there…….

This is what the Wizard told me….. “Once upon a time a farmer from Mobberley, mounted on a milk-white horse, was crossing the Edge on his way to Macclesfield to sell the animal. He had reached a spot known as the Thieves’ Hole, and, as he slowly rode along thinking of the profitable bargain which he hoped to make, he was startled by the sudden appearance of an old man, tall and strangely clad in a deep flowing garment. The old man was me! I ordered him to stop, and told him that I knew the errand upon which he was going, and I offered a sum of money for his horse. The farmer, however, refused the offer, not thinking it sufficient. “Go, then, to Macclesfield,” I said, “but mark my words, you will not sell the horse. Should you find my words come true, meet me this evening, and I will buy your horse.” The farmer laughed at my prophecy, and went on his way. To his great surprise, and greater disappointment, nobody would buy his horse, though all admired his beautiful white horse. He was, therefore, compelled to return. On approaching the Edge he saw me again. Checking his horse’s pace, he began to consider how far it might be prudent to deal with me, a perfect stranger, in so lonely a place. However, while he was considering what to do, I said to him, “Follow me!” Silently, I led him by the Seven Firs, the Golden Stone, by Stormy Point, and Saddle Bole. Just as the farmer was beginning to think he had gone far enough he fancied that he heard a horse neighing underground. Again he heard it. Stretching out my arm I touched a rock with my wand, and immediately the farmer saw a ponderous pair of iron gates, which, with a sound like thunder, flew open. The horse reared bolt upright, and the terrified farmer fell on his knees praying that his life might be spared. “Fear nothing,” I said, “and behold a sight which no mortal eye has ever looked upon.” I took the farmer through the gate and into the cave. In a long succession of caverns the farmer saw a countless number of men and horses, the latter milk-white, and all fast asleep. In the innermost cavern there were heaps of treasure piled up on the ground. From these glittering heaps I told the farmer to take the price he desired for his horse, and said to him, “You see these men and horses; the number is not complete. I need your horse to make it complete. Remember my words, there will come a day when these men and these horses, awakening from their enchanted slumber, will descend into the plain, decide the fate of a great battle, and save their country. This shall be when George the son of George shall reign. Go home in safety. Leave your horse with me. No harm will befall you; but henceforward no mortal eye will ever look upon the iron gates. Begone!” The farmer lost no time in obeying my command. He heard the iron gates close with the same fearful sounds with which they were opened, and made his way to Mobberley.”

“So what are you waiting here for?! I enquired.
“Well,” said the Wizard, ” I would rather like a large horse for myself, but none have passed this way for a very long time. I am happy to wait though, I have a large hat to keep the rain off my head, and a strong cloak to keep the wind and cold at bay. To pass the time I look up at the old house, up there, where it is warm. I listen to the children playing and sometimes they come and speak to me, and laugh and smile. Nobody even noticed me when I was stuck inside that old beech tree!”